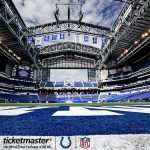 Varsity Football put on one heck of a show Saturday night in Lucas Oil Stadium. The Rocks faced the always tough Fishers Tigers, fighting all the way through regulation and into three overtimes before falling to Fishers 48-45. Offensively, the Shamrocks were dominant all night, driving the ball at will on the Tigers. Nick Ferrer 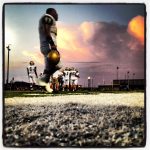 Varsity Football released a feeding frenzy at Avon Friday night, opening a lead early and then hanging on to win 17-15. Offensively, the Shamrocks bit early, opening the 17-6 lead at half time. Frank Grimes turned in another magnificent performance, bolstering the growing reputation of the Rock ground attack. Elvin Caldwell added his own consistent

JV The JV Football Team started the season with a big victory over Harrison, 30-0. After a scoreless first quarter, they showed that they had the resolve to win with a 30 point onslaught all in the second. Offensively, the Rocks were able to move the ball up and down the field thanks to the 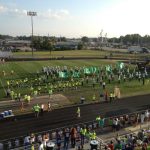 Varsity Football stood strong against Harrison on Friday night, rolling to a 42-13 victory over the visiting Raiders. Offensively, the Shamrocks jumped out to a 35-0 lead by halftime, capitalizing on several extra early possessions. Frank Grimes shredded the Raider defense behind the stellar blocking of the Rock O-line. The Westfield ground attack was unstoppable 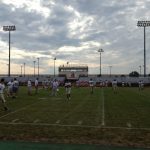 During the season, Mondays are Rock Report days. That’s where I recap Friday night’s action and give shout outs to our top performing Rocks of the week. This week we just had the scrimmage up at Hamilton Heights, so we didn’t choose players of the week. It was great to hit a different color for 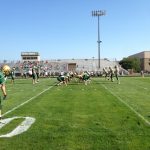 Shamrocks played against Shamrocks on Saturday in the annual Green vs Gold game. A good crowd turned out to take in the event, and they were treated to some solid Rock Football. There were a lot of exciting plays on both sides of the ball, at all levels. It was a beautiful day for it, and

The football team is moving into our new home here on the Westfield Athletics site. Bear with us as we get our area up and running. For more information in the mean time, check out our Social Media and Info Page (in the Program Links above) for links to our blog, twitter, and more! 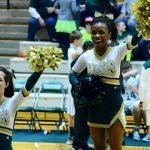 With the new website, we now have a portal to promote our sports like never before.  If you would like to get involved with reporting scores, writing articles or even taking pictures or video … Contact the Athletic Department to see what you can do to help and make westfieldathletics.com the best of the best