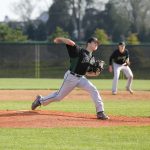 The 7th ranked Rocks traveled to Zionsville to open an HCC series with the defending HCC Champion and Regional Champion Eagles.  Westfield jumped on the Eagles early, scoring two runs in the first and second innings to open a 4-0 lead.  The Rocks tacked on a run in the 5th and went on to defeat 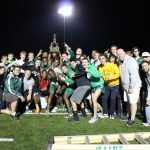 The Westfield boy’s varsity track team won the team title of the Zionsville Invitational track meet where ten teams from around the state competed.   It was a total team effort from distance, sprints and field participants.  16 different boys contributed to the Shamrock victory.  The relay teams and the distance members were dominant and there were 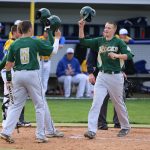 #7 Westfield made the short trip to Carmel Friday night for a showdown with the Carmel Greyhounds. The Greyhounds had trouble stopping the Rocks offensively as they scored in five of the seven innings of the game en-route to a 9-3 victory.  Freshman Max McCool got the start and pitched three innings, allowing three unearned 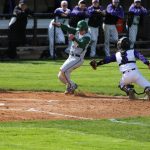 The 7th ranked Rocks traveled to Brownsburg to play a HCC double header last night.  In game one, the Rocks jumped out to an early lead, scoring four runs in the top of the first inning.  The Bulldogs pulled within one run in the 3rd inning only to have the Rocks answer with two in 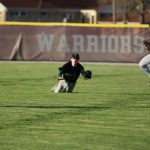 The 7th ranked Rocks traveled to Danville last night for a game with the Warriors and returned with their 5th straight victory to improve to 8-2 on the season.  Jacob Robinson started on the mound and pitched three innings to earn the win.  He struck out struck out four and allowed only one earned run. 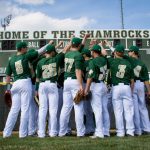 The April 22nd polls have been released by the IHSBCA and the Shamrocks come in ranked 7th.  The Rocks still have HCC foes McCutcheon, ranked #1, and Noblesville, ranked #6, on their schedule.  The highest ranking the Rocks have received is #3, back in 2010.  The Rocks entered last season ranked #11 and, in 2009, 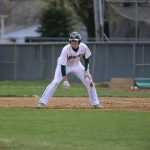 The Fishers Tigers traveled to Westfield Saturday morning for the series finale with the Rocks.  Fishers jumped out to a 3-0 lead after two innings and held the lead until the Rocks tied the game in the 5th inning.  In the 6th inning, Westfield exploded for seven runs en route to another 10-3 victory.  The 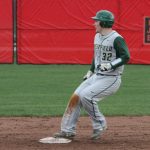 The Rocks moved to 5-0 in HCC play and 6-2 overall with a 10-3 win at Fishers High School Friday evening.  Luke Dietz started on the hill for Westfield and pitched 5.1 innings to earn the win.  He allowed only two earned runs, scattered eight hits and struck out five.  Nick Reifel pitched 1.2 innings 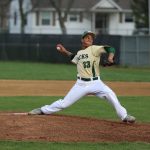 The Rocks hosted the 19th Ranked Avon Orioles at Shamrock Field last night.  The clash turned out to be an old fashioned pitchers duel.  The only run for the Rocks was scored by Alec Nelson on a Jake Dietz RBI ground out in the second inning.  That run was all Westfield would need as Junior 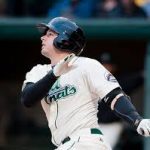 Westfield High School graduate Kevin Plawecki (2009) is off to a torrid start for the Savannah Sandgnats, the Class A affiliate of the New York Mets.  Through twelve games, Plawecki is hitting .375 with a whopping eight doubles, two home runs and eleven RBI.  His slugging percentage is .667 and his OPS, which many regard