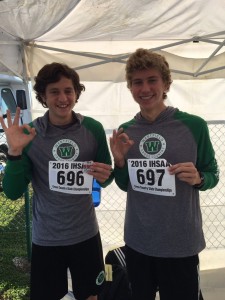 Two members of the Westfield boys cross country team competed at the IHSAA State Championship on Saturday in Terre Haute on a hot and windy day and produced outstanding results. Aaron Bennett became the most decorated boys cross country athlete in school history, finishing on the podium in 13th place, the 2nd best finish for a boy in school history. That, added with last year’s 24th, make him the only boy in school XC history with two All-State performances. That performance qualified him to compete on the Indiana All-Star team at the Mid East Meet of Champions in Kettering, Ohio in three weeks, making him the 5th Westfield boy selected to the Indiana all-star team in the last 7 years. Added to his two all-state performances in track, one of which was a state runner up, and 4 indoor state medals, one of which was a state championship, Aaron has put together one of the most impressive running careers in Westfield’s rich history. Nick Leahy followed up a track season which saw him on the state runner-up 4×800 relay with a great cross country season, surprising many by qualifying for the state meet out of the ultra-competitive Shelbyville Semi State, finishing 99th out of 206 runners. Congratulations to Aaron and Nick on outstanding seasons.