The boys golf team won the 2016 IHSAA Boys Golf State Championship at Prairie View Golf Club.  The Rocks took the lead about halfway through day 1 of the 2 day tournament and never relinquished that lead.  At the end of day 1 the Rocks lead by 6 strokes after shooting a very impressive -3 as a team.  Senior leadership was huge for the Rocks.  Senior Thomas Lewis lead the charge for the Rocks on day 1 shooting a 68 and going 4 under on the day.  Lewis’ teammates gave him plenty of support with Senior Johnny Deck shooting a 1 under 71 followed by Andrew Lewis shooting an even par 72 and Noah Shanteau firing a 74.

Day 2 of the tournament the Rocks fought off challenges throughout the day to win the state championship by 3 strokes. Deck stayed hot shooting a 2 under 70 to go along with Thomas Lewis’ 74 and Shanteau’s 73.  Both days of the tournament, players had to endure lengthy rain delays upwards of 4 hours.  The mental toughness of the Rocks was too much for the 14 other teams in the state tournament. Head Coach Jon Hoover and his assistants Scott Evans and Max Niehans did a great job of keeping the Rocks focused.

Individually the Rocks had 2 top 10 finishes.  Deck finished 3rd with a 2 day total of -3 and Thomas Lewis finished 4th with a -2 overall.  Both of them were also selected to the the all state team. 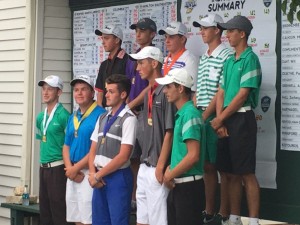 Editorial comment:  There have been many players over the past 4 years that have contributed to this success.  However there have been 3 constants throughout it all.  Head Coach Jon Hoover and this years seniors, Thomas Lewis and Johnny Deck have been the pillars of what a first class, top notch program should look like.   Their leadership and example is a model of what IHSAA sports represents.  To Coach Hoover-your expertise, knowledge, and guidance is a standard bearer for all coaches of any sport.  And to Johnny and Thomas-it has been an absolute honor and privilege to watch the two of you play the past 4 years.  The two of you embody what a true student-athlete is all about. Good luck as you continue your student-athlete careers in college and golf at Lipscomb (Johnny) and at Purdue (Thomas).  And remember: Once a Shamrock always Shamrock!