Six more Westfield Seniors officially made their commitment to showcase their skills and abilities and play collegiate athletics.  WHS and the Athletic Department are proud to see their dedication and hard work pay off and achieve their dreams. 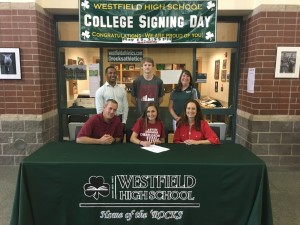 Pictured above is Jensen Bailey who will be attending Indiana University in Bloomington, IN.  Jensen successfully tried out and made the Varsity Cheer Squad for the Hoosiers.  At WHS, Jensen has been a 4 year member of the Varsity Cheer Team and a Team Captain. She earned All-American Cheerleader Honors 3 years and helped lead the Rocks to two top 5 finishes at the State Cheer Competition.   Jensen is also a member of the National Honor Society and Spanish National Honor Society.  At IU, Jensen plans on majoring in business management and minoring in interior design.  Pictured above with Jensen are her parents Mike and Tammy Bailey (sitting), along with Chris Little-Varsity Cheer Coach, Jaret Bailey-Brother, and Beth Ellis-Varsity Cheer Coach (standing). 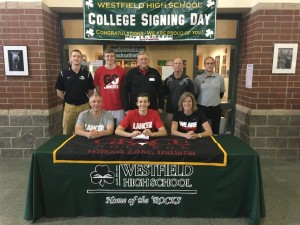 Pictured above is Charlie Warner who will be attending Grace College in Winona Lake, IN where he has committed to play basketball for the Lancers.  At WHS, Charlie played basketball 4 years earning 3 varsity letters and tennis 4 years earning 4 varsity letters.  He was a team captain for both Basketball and Tennis.  Charlie earned All Hoosier Crossroads Conference and All Hamilton County Honors his junior and senior years in basketball. As a senior he earned All-State Academic honors in both basketball and tennis.  Charlie is the all time leader in tennis victories at WHS.  He is also a member of the National Honor Society.  At Grace, Charlie plans on majoring in accounting.  Pictured above with Charlie are his parents Steve and Laura Warner (sitting), along with Will Staal-WHS Varsity Assistant Basketball Coach, Sean Warner-Brother, Jim Kessler-Varsity Coach Grace College, Shane Sumpter -WHS Varsity Basketball Coach, and Ken Hampton-WHS Varsity Assistant Coach (standing). 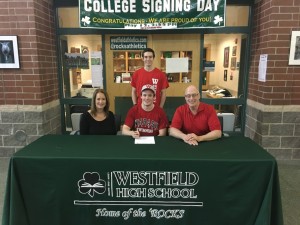 Pictured above is Tab Kenny who will be attending Wabash College in Crawfordsville, IN where he has committed to swim for the Little Giants.  Tab was a four member of the swim team at WHS earning varsity letters all 4 years.  He also earned births and swam all 4 years in the IHSAA State Championships.  Tab had many swimming accomplishments including winning the sectional in the 50 free his sophomore year.  As a junior, Tab was a Boys State Delegate.  At Wabash, Tab is undecided on a major but plans on studying biology, political science, business, and religion.  Pictured above with Tab are his parents Jane and Scott Kenny (sitting), along with his brother, Chris Kenny (standing). 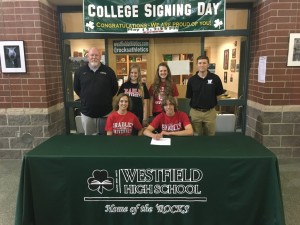 Pictured above is Alec Hartman who will be attending Bradley University in Peoria, IL where he has committed to run Cross Country and Track for the Braves.  Alec was a four year member of the cross country and track teams at WHS earning 8 varsity letters.   He holds the school record in the 800, 4 x 800 Relay, and 5K; and was also a member of the 4 x 800 indoor state championship relay team.  Alec is National Merit Scholar.  At Bradley, Alec plans to major in physics and computer science.  Pictured above with Alec is his mother, Annette Hartman (sitting), along with Roger Wachtel-Varsity Track Coach, Ava Hartman-Sister, Rachel Hartman-Sister, and Greg Albert-Varsity CC Coach (standing).  Not pictured is Brian Hartman-Father. 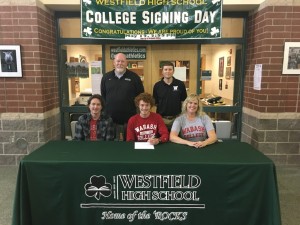 Pictured above is Sam Henthorn who will be attending Wabash College in Crawfordsville, IN where he has committed to run Cross Country and Track for the Little Giants.  Sam was a four year member of the cross country and track teams at WHS earning 8 varsity letters.  He is a school record holder in the  4 x 800 Relay, and was also a member of the 4 x 800 indoor state championship relay team.  At Wabash, Sam plans to major in Biology and later attend med school to become an orthopedic surgeon.  Pictured above with Sam are his parents Doug and Kelly Henthorn (sitting), along with Roger Wachtel-Varsity Track Coach, and Greg Albert-Varsity CC Coach (standing). 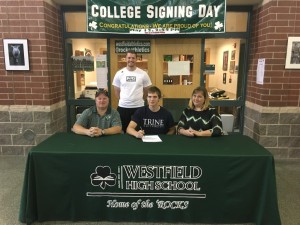 Pictured above is Zachery Paterson who will be attending Trine University in Angola, IN where he has committed play Lacrosse for the Thunder.  Zachery was a four year letter winner of the Lacrosse Club Team at WHS.  He was MVP of the team his junior year and is currently a Senior Captain.  Zachery also played football for 3 years and is an AP Scholar Award winner.  At Trine, Zachery plans to major in Mechanical Engineering.  Pictured above with Zachery are his parents John and Michelle Paterson (sitting), along with Chris Uselmann – Assistant Lacrosse Coach (standing).