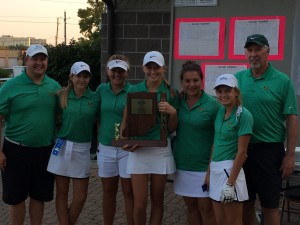 The Westfield Girls Golf Team defeated the #1 ranked defending State Champion Carmel Greyhounds at South Grove Golf Course, to win their first ever Sectional Championship. The Lady Rocks held strong throughout the day to defeat Carmel 312-315. After the first nine holes the Shamrocks held a mere one stroke lead on Carmel and was able to hold onto that lead through the back nine holes.

The Lady Rocks were led by Cailyn Henderson and Adrienne Montalone who both shot 73. Margaret Wentz followed with an 80, Kaylee Purcell 86 and Morgan Baechle 87. Henderson and Montalone had to compete in a playoff with Carmel’s Allyssa Cook for individual medalist. During the playoff Henderson drove the green on a 284 yard par 4 and birdied the hole for medalist honors.

The Lady Rocks will now be competing in the Roncalli Regional at Smock Golf Course Saturday September 27th.The top three teams from Regional advance to the State Championship at Prairie View Golf Club on October 3rd and 4th.